Mystery and humour together? Yes, please! Here is Kris Bock visiting us today to dish the goss on her humorous mystery series, The Accidental Detective.

Tell us about yourself

I started my writing career with children’s literature, writing for kids as Chris Eboch and MM Eboch. My first published book is The Well of Sacrifice – historical drama set in ninth-century Mayan Guatemala. It’s been in print for over twenty years and is used in schools when they teach the Maya. I’ve written over 100 educational work for hire books, and I’ve been a ghostwriter for some popular children’s mystery series starring your favorite young detectives.

I write for adults under the name Kris Bock. I’ve written romantic suspense and a sweet romance series based around a cat café. I have a humorous mystery series coming out this year, with four books scheduled. The first is: 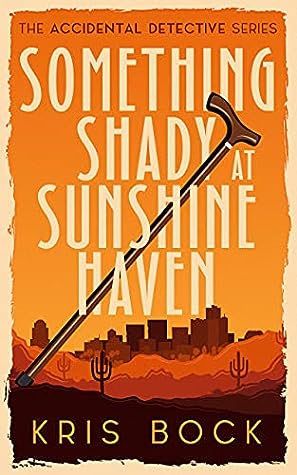 Something Shady at Sunshine Haven: The Accidental Detective Book 1

War correspondent Kate Tessler has followed the most dangerous news stories around the world. But can she survive going home?

Injured in a bombing, Kate returns to her hometown in Arizona to recover. For the first time in her life, she’s starting to feel her age (49), even though she’s living like a teenager again: staying with her father, trying to understand why her sister resents her so much, and running into people who still think of her as Kitty.

Seeing her mother in an Alzheimer’s unit is the hardest part – until an old friend asks her to investigate suspicious deaths at that nursing home. Is a self-appointed “Angel of Mercy” killing patients to end their suffering? Are family members hastening their inheritance? Is an employee extorting money and removing the witnesses? Kate uses her journalism skills to track clues, but the puzzle pieces simply won’t fit.

If Kate can’t uncover the truth, her mother could be next on the killer’s list.

What inspired this mystery series?

Kate spent thirty years traveling the world as a war correspondent. Now back in Arizona, she finds turning fifty as difficult than the mysteries she solves. This character was inspired by my own experiences. Okay, the part about turning fifty, not traveling the world as a war correspondent. I traveled a lot when younger, but not to war zones. But as I faced fifty, I wanted to create a mystery lead dealing with some of the same issues: aging parents, concerns about financing retirement someday, and a body that doesn’t recover like it once did. I also wanted to give Kate a reason to be adventurous and fearless, thus the background as a war correspondent.

I didn’t necessarily intend to write humor, but both my agent and my editor said they laughed a lot. That comes from how Kate sees the world, which is how I see the world. Laughter helps with the pain.

Why did you set the series in the Southwest?

I’ve lived in New Mexico for over twenty years, three times longer than I’ve lived anywhere else, so this is home. We live in a small town, but I wanted to set the mystery series in a big city. In Arizona, I could create a fictional city within the greater Phoenix metropolitan area. That allows me to use this fictional city government for political issues, and make the mayor an old friend of Kate’s, without stepping on any real toes.

Arizona also provides tons of mystery opportunities. The large senior population attracts scams and abuse. You have the potential for arguments over inheritance (or even murders to get that inheritance sooner). The border with Mexico creates anxiety over immigration and various kinds of trafficking. Plus you have all the usual potential crimes in any large population. I’ll be able to keep Kate busy for years.

Where can people learn more about the series?

You can get a free short story and bonus material when you sign up for my newsletter. This collection starts with a humorous ten-page mystery short story set in the world of “The Accidental Detective” series. It includes information about the books in the series, with the first chapter of book 1. After that are three fun, short stories originally written for children. Newsletter subscribers will also get a thirty-five page novella set in the world of my cat café sweet romance series, and “22 Recipes from the Cat Café,” if they choose.

Why did you write the cat café sweet romance series?

Until you consider cat cafés. These are a relatively recent trend, but you can now find a few hundred cat cafés all around the world. Typically they partner with a shelter, so all the cats you can visit are available for adoption. This gives visitors a chance to spend more quality time with the cats before they choose one. Those of us who can’t keep a cat in the home for whatever reason can at least visit some.

What else do you have in the works?

I’m writing a series with my brother, scriptwriter Douglas J Eboch, who wrote the original screenplay for the movie Sweet Home Alabama. These are prequel novels set when the movie characters are teenagers. Follow the crazy antics of Melanie, Jake, and their friends a decade before the events of the movie.

Kris Bock writes novels of mystery, suspense, and romance with outdoor adventures and Southwestern landscapes. She has lived in ten states and one foreign country but is now firmly planted in the Southwest, where many of her books are set. Kris writes for children under the names Chris Eboch and M. M. Eboch. She has published over 100 books for young people, including ghostwriting for two children’s mystery series.