I don’t normally post about steamy books on this blog, but Enni Amanda’s latest novel, Night and Day had this delightful pick-me-up quality about it that I just had to share with you. The development of both characters and their romantic relationship was such a vibe, but not in that fantastic bombastic way you’d expect to see in, say, a Hollywood rom-com.

There’s something to be said about down-to-earth stories just one or two steps sideways from reality. They’re the stories that help us remember love could really be just around the corner (or an awkward phone call away) if we let ourselves be open to it. 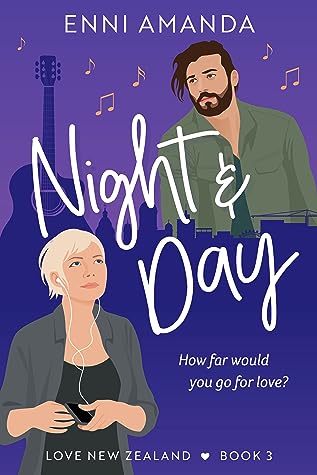 She lives on the other side of the world. He doesn’t go beyond the corner store.

TV producer Mia is torn between her work ambition and passion for songwriting. Facing a huge career choice, she embarks on a round-the-world trip to find answers. Soul searching turns into a nightmare when she’s robbed. Stuck in New Zealand with only a guitar on her back, she calls the one local she can think of: an editor she once hired via email.

Izzy spends his days in his basement, working on an ambitious film project. His family wants him back on the dating scene, but Izzy prefers imaginary realms to real people. He’ll join the living when he’s reached his creative goals. Probably.

When Izzy’s solitude is crashed by a woman in trouble, he can’t resist the call to help. Having a fleeting visitor gives him an idea – a fake relationship with Mia will get his family off his back. In return, he’ll be a good host (nothing more) and show her New Zealand is not a crime-infested hellhole. He’ll just have to ignore the instant attraction and creative sparks that fly when they’re in the same room, or boat, or… cave.

Their chance encounter changes everything, but how could it ever work? Mia’s whole life waits for her in Helsinki, while Izzy struggles to leave his basement. They’re night and day. Unworkable.

Opposites attract, but how far would you go for love?

The chemistry between Mia and Izzy was lovely to see unfold. Through their moments of insecurity and connection, you get to know who they are as people and how interestingly they come together as a couple. Echoing real life, sometimes “opposites attract” is really “same same but different”, and it was lovely to read a romance that handles the nuance of such a thing.

Worth mentioning also is the overall tone of this book. I found it mild and gentle, even as it dealt with heavy themes such as suicide, anxiety and the threat of infidelity. It’s the kind of book you could recommend to someone who wants to be intrigued by two likeable people falling in love, but without the threat of being battered about by high emotion, because sometimes life is emotional enough.

Night and Day by Enni Amanda is available on Amazon.