Oh, what’s in a name? Author Goldy Moldavsky is here to tell us. When you’re done reading her post, check out her newly released thriller, The Mary Shelley Club, and remember to enter the giveaway!

Naming book characters should be one of the most fun parts of writing a novel (they could be anything—what freedom!) but I’ve always found this to be a task best put off until the last possible minute. I never know what to name my characters, despite having a running list of fun (read: ridiculous) names that I keep tucked away in my idea notebook.

Instead of letting my indecision about names bog me down while I’m writing, I simply move along with placeholders in my wake. This is why, in my notes and early drafts, my main character almost always goes by the groundbreaking moniker of MC. (Main Character—get it?) Their love interest? You guessed it: LI.)

It took a long time for me to finally settle on the right names for the characters in THE MARY SHELLEY CLUB, a story about a new girl at an elite Manhattan prep school who joins a secret society of fellow horror aficionados. They play a game they think is harmful but which soon turns deadly. And with a masked madman on the loose, no one in the club is safe.

The inspiration for the characters’ names came from surprising and disparate (and maybe desperate??) places. Here’s a list of the characters and how I chose their names.

Rachel and Freddie – I’m listing their names together because they came to me at the same time. One name could not exist without the other. These poor fools were nameless until I realized exactly who I wanted to model them after. Rachel Leigh Cook and Freddie Prinze Jr., the stars of everyone’s fave 90s romcom, She’s All That.

Bram – The members of the Mary Shelley Club are modeled after the group of people the actual Mary Shelley spent the summer of 1816 with. Among them was the dashing Lord Byron. I was thinking of giving this character a similar name (Brian) but then I came up with a more fitting ‘B’ name. Bram Stoker, the author behind Dracula.

Thayer – This one is a bit of a mystery even to me. All I know is that I have a bottle of Thayer’s Witch Hazel in my medicine cabinet and that must have something to do with it. 😊

Felicity – For Felicity, the gloomiest, most sardonic member of the club, I wanted to give her an ironic name, something that felt like the opposite of her natural disposition. Felicity means happiness, and it also happens to be the name of one of my favorite, sweet TV characters: Felicity from the classic TV show Felicity.

Lux – Lux is a name I’ve always liked, ever since I first saw it used in The Virgin Suicides. Maybe it’s due to Lux Lisbon, but the name, to me, is forever associated with blonde, ice could youth. And that’s the Lux in my story.

Saundra – I had no clue what to name Saundra and her name literally came from me looking around my writing space, searching for something that sounded good enough. I had a Poets & Writers magazine nearby with George Saunders on the cover and so, Saundra’s name was born.

Mr. Braulio – The Assistant Headmaster (AssHead for short) gets his name from the romantic lead of one of my favorite teen Mexican telenovelas. Braulio from Corazones Al Limite. (That’s Hearts to the Limit! in English.)

Trevor Driggs – Driggs Avenue in Brooklyn, where I was passing by when trying to think up names.

And that’s a sneak peek into the very unscientific way a writer may come up with a character’s name. 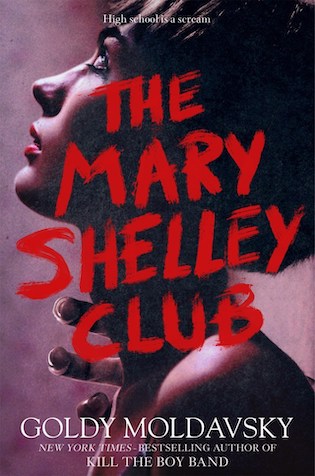 When it comes to horror movies, the rules are clear:

x Avoid abandoned buildings, warehouses, and cabins at all times.
x Stay together: don’t split up, not even just to “check something out.”
x If there’s a murderer on the loose, do not make out with anyone.

If only surviving in real life were this easy…

Then Rachel is recruited by the Mary Shelley Club, a mysterious society of students who orchestrate Fear Tests, elaborate pranks inspired by urban legends and movie tropes. At first, Rachel embraces the power that comes with reckless pranking. But as the Fear Tests escalate, the competition turns deadly, and it’s clear Rachel is playing a game she can’t afford to lose. 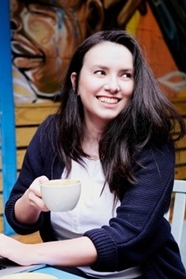 Goldy Moldavsky was born in Lima, Peru, and grew up in Brooklyn, New York, where she lives with her family. She is the New York Times–bestselling author of Kill the Boy Band and No Good Deed. Some of her influences include Buffy the Vampire Slayer, the esteemed works of John Irving, and the Mexican telenovelas she grew up watching with her mother.