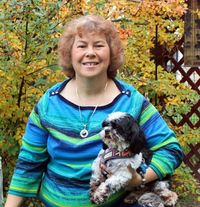 June is National Adopt-a-Cat Month in the United States, started by American Humane and promoted by other animal welfare organizations, including The Society for the Prevention of Cruelty to Animals.

I’ve rescued and/or adopted many cats in my lifetime, including the two sisters that currently live with me, Murphy and Bailey. Their mamma was abandoned on a friend’s ranch, and she took the pregnant cat into her home where, two days later, she birthed kittens. I brought home two; they will be 16 in August.That experience prompted a scene in my book Finding Love at Compassion Ranch, which released in May 2020. The book is based on a real animal sanctuary in Wyoming, where I live, called Kindness Ranch. The mission of this organization is to provide shelter and homes for animals that have been researched on. It’s a lovely property with kind, caring staff and volunteers. They take in dogs, cats, horses, cattle, sheep, rabbits, and other animals in need. Learn more about the sanctuary here: https://kindnessranch.org/

While visiting the sanctuary a few years ago, two yellow tabby cats caught my attention. They played together and then lounged together. As I wrote Finding Love at Compassion Ranch, I thought of my sister-cats and the two tabbies at Kindness Ranch. I created similar felines, and in the story, my primary female character adopts them.

Below is a short excerpt:

That evening before sunset, Mike secured wire to a wooden post a few feet from the barn. More fencing to his left helped create a new corral, the project he’d been working on all day. He didn’t hear Erin walk up until she called out, “Hi, there, busy guy!”

He stopped his work and looked at her. Her large smile brought one to his face.

Mike noticed Winston beside her. He squatted down and said, “Hey there, fella. How are you and those cats doing?”

Winston, his tail wagging, sauntered up to Mike, and the ranch manager patted the little dog’s head.

“They’ve done very well,” Erin responded as she walked closer. “A few hisses and growls by the cats at first, but with Winston’s gentle, sweet personality, the Ricky and Rocket adjusted pretty quickly. Winston learned about cats while at Rhiann’s sanctuary, so he knows not to push the limit. They all took about a thirty-minute nap on the couch before supper. I think Brittany’s going to be quite happy with the boys.”

As Mike drew to his full six-foot-one height, he noticed Erin held a cloth bag in her hand.

“You don’t have the cats in there, do you?” he asked in a teasing voice as he pointed to the sack.

She laughed slightly and held up the bag. “I think you’d hear a lot of fussing. No, silly. I brought your supper. I’ve been hearing the pounding of nails all afternoon and saw you putting those posts in the ground earlier. I figured you could use a break.”

She opened the container, which held two sandwiches, a small bag of potato chips, and a covered glass pitcher of lemonade. Her kindness startled him. Not that Erin wasn’t thoughtful, but in the midst of her own busy day, settling in two cats, the thought that she would notice he hadn’t taken a break in several hours touched his heart.

“Thank you, Erin. I appreciate your thoughtfulness,” he said in a sincere voice.

She smiled and handed Mike the bag. He reached for the lemonade first and poured a cup from the small thermos. After consuming the tart liquid, he said, “Ah! That hits the spot.” He smiled. “I knew you were a good woman, Erin, I just didn’t realize how much of an angel until now.”

She blushed and smiled. “There are two ham and cheese sandwiches in there and a small bag of chips.”

“I didn’t know you had such food in your cabin,” he commented. “I know you’re a salad and chicken girl.”

“Maggie told me how much work you have ahead before the horses get here, so when I was in town earlier getting supplies for the cats and my extended stay, I picked up a bit extra.”

“That’s kind of you. What do you mean, your ‘extended stay?’”

“Maggie asked me to stay on a bit, like you said she might. I agreed to a few extra days, with the cats and now horses coming in.”

I dedicated the book to the staff and volunteers at Kindness Ranch, and I’m looking forward to visiting the sanctuary again later this year.

Take a trip to a similar place in my book and be inspired by people who rescue and adopt animals! Finding Love at Compassion Ranch is available in e-book and print formats; the e-book is just $1.99 through the month of June in honor of Adopt-a-Cat Month in the U.S. 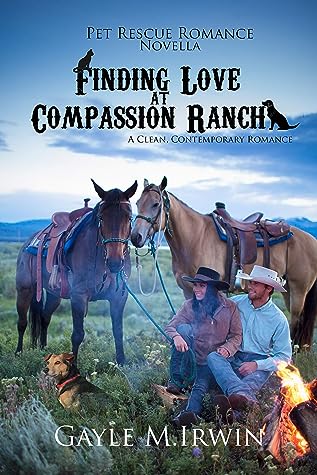 Erin Christiansen is still adjusting to life as a widow. She seeks additional healing by volunteering at Compassion Ranch, a sanctuary for former research animals. Upon arrival at the majestic and unique northwestern Wyoming ranch, she meets Mike, a man she knew in high school, whose compassion for animals and people might be the balm Erin needs. Retired veterinarian Mike Jacobs is no stranger to loss. Five years after the accidental death of his wife, he now serves as ranch manager of Compassion Ranch. He not only fixes fence and provides tours, but he applies his veterinary skills and his heart for animals to his work. Upon recognizing Erin from high school, he can barely believe his first love will spend a few weeks at the sanctuary. Can Erin and Mike span the years since they have seen each other or do they, like many of the rescued animals, have wounds that run too deep to trust and love again?

Gayle M. Irwin is an award-winning author and freelance writer, being recognized by Wyoming Writers, Inc., and the Wyoming Press Association for several of her works. She is a contributor to seven Chicken Soup for the Soul books and the author of many inspirational pet books and stories for children and adults. Her sweet, contemporary romance series, Pet Rescue Romance, consists of Rhiann’s Rescue, Rescue Road, My Montana Love, and Finding Love at Compassion Ranch. Gayle volunteers for various dog rescue and humane society organizations and donates a percentage of all book sales to such groups. Learn more about her and her writing and follow her bi-monthly blog on her website: https://gaylemirwinauthor.com/.